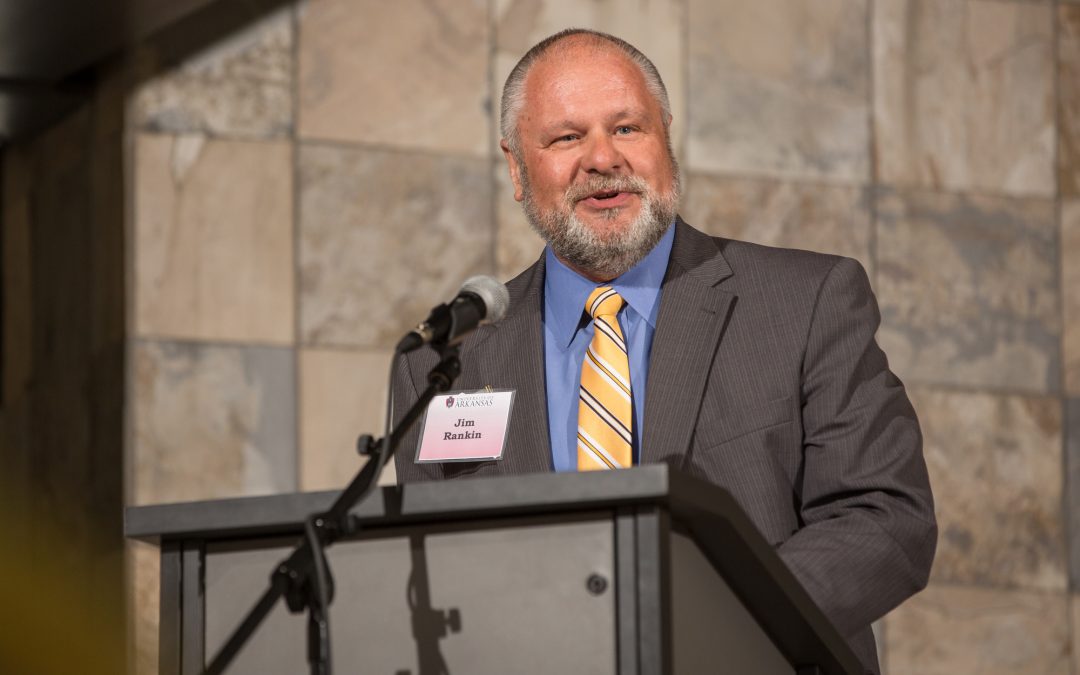 RAPID CITY, S.D. (Nov. 7, 2017) – James (Jim) Rankin, the chief research officer and professor of electrical engineering at the University of Arkansas, will return to his alma mater as the 19th president of South Dakota School of Mines & Technology, the South Dakota Board of Regents announced Tuesday.

Rankin, a South Dakota native from Draper and Fort Pierre, graduated from SD Mines in 1978 with a bachelor of science degree in electrical engineering. He becomes president at the Rapid City campus Jan. 8, 2018. He succeeds Jan A. Puszynski (YAWN push-IN’-skee), who served in an interim capacity this year as president after Heather Wilson left the university to become United States Air Force Secretary. Puszynski will continue in his position as Mines’ vice president of research.

Regents’ officials said Rankin delivered compelling credentials as a candidate for the Mines’ presidency. “His experience as a senior academic leader and his involvement in research and economic development at both the University of Arkansas and Ohio University, combined with his personal knowledge of the School of Mines, made Dr. Rankin a strong choice to foster new growth on the Mines’ campus and further enhance this engineering and science university going forward as its next president,” said Regent John Bastian, who chaired the presidential search committee. “The Board of Regents is delighted to welcome Jim Rankin back to South Dakota and to a Mines’ campus that he knows quite well.”

Under Rankin’s leadership as vice-provost for research and economic development, the University of Arkansas has generated more than 50 start-up companies and significantly increased annual external funding to $103 million. He led efforts to develop the institution’s first strategic plan in research and economic development, instituted several faculty recognition programs, and developed an expedited industry contracting process.

Previously at Ohio University, Rankin was interim vice president for research, associate dean, professor of electrical engineering, and director of the Avionics Engineering Center. He has also been a professor at St. Cloud State University and an engineer at Rockwell-Collins. Rankin’s personal research has been funded by numerous NASA and FAA grants. His Ph.D. and master’s degrees in electrical engineering were earned at Iowa State University.

“I am very honored to be returning to SD Mines as its 19th president. I know firsthand the excellent academic preparation that students receive here,” Rankin said. “A 98 percent placement rate for 10 straight years is a testament to the quality education provided by the outstanding Mines’ faculty. There will be a continued emphasis on the success of our students.

“The school is poised to grow in many areas, including student enrollment and sponsored research,” he said. “Faculty-led innovation will have an increasing role in the area’s economic development. I look forward to working with our loyal alumni and friends to develop the resources needed by faculty and students for these initiatives. I am also excited to team with our faculty, staff, and students to continue to enhance the school’s reputation throughout South Dakota, the region, and the nation.”

Rankin’s spouse, Wendy, holds a Ph.D. in counselor education from Ohio University and is active in student engagement and philanthropy. They have three adult children, Kara, Anna, and Daniel.  Kara, a doctor of physical therapy, and her husband, Caleb, live in North Carolina. Anna, an assistant professor at Ohio University, and her husband, A.J., live in Ohio. Daniel is an aeronautical engineer working in industry in Los Angeles. The Rankins have two grandchildren.

In addition to family and travel, Rankin has numerous interests including aviation. He holds multiple pilot licenses and ratings, and is a member of the Board of Trustees for the American Institute of Aeronautics and Astronautics (AIAA). His current research area is on avionics requirements for on-demand mobility (flying cars).

The South Dakota School of Mines & Technology is committed to excellence in science and engineering academics and research, and to developing the next generation of leaders and problem solvers. It was founded in 1885 to provide instruction in the region’s primary industry, mining, and has evolved into one of the leading science and engineering universities in the region. SD Mines serves as a conduit for the development of new technologies and world-class research.  The innovation and ideas that flourish at Mines translate to new businesses and high-paying jobs in South Dakota and beyond.

The university is governed as part of a system of public higher education by the South Dakota Board of Regents, which is composed of members appointed by the governor for six-year terms and one student regent appointed for a limited term.